Two weeks ago my college boy son came home for the weekend. It is always wonderful to see his sweet face and to soak in his presence.

When he walked through the door, I could tell something was off. It's that momma discernment kind of thing. I just knew something wasn't right.

He has been taking a religion class at school. It has been tough on him. He is learning about different religions and it has been confusing him and rocking his faith. We have had many discussions, which I feel very ill equipped for.

I have dreaded the hard questions he asks me and his father, and I have begged and pleaded with God to give us wisdom to help answer some of his questions.

Joseph, my son, is a deep thinker and has a very academic mind. I, on the other hand, have a very child like faith and have a hard time with apologetics and deep theological conversations. But, I have been praying my way through these hard talks with him. Blundering at times it seems.

Joseph pulled me aside that weekend and shared that he was really, really struggling. He said he was in a very dark place with his faith. He said he was begging God to reveal Himself to him. In some way, in any way. Just a sign, a sliver of hope to cling to during this dark season.

My heart sank. I felt like I could just melt into the crevices of our hardwood floor. I wanted to go away and not face this. It was hard seeing my boy struggle and to see the light escape from his green eyes.

That Sunday, he left to go back to college.

He texted me the very next day and asked me to please pray that God would help him and reveal Himself to him. With a very heavy heart, I agreed.

The next morning, I sat down and spilled my heart onto the lines of my prayer journal. I was desperate for God to help Joseph. I was frustrated because my son had taken this class to help strengthen his faith and to equip him to witness to others with different faiths. It seemed to be doing exactly the opposite.

It was Holy week of all weeks. I decided to fast that week as well. Not only because of my need for God to help my son, but for my own heart and weaknesses. I needed Jesus and I needed faith just as much as Joseph did.

On Wednesday, I had not heard from my son. I decided to text him around 9:00 pm.

Immediately he responded with this, " Mom, I have the most amazing God story to share with you! I will call you when I get back to my apartment."

My heart fluttered. My palms were sweaty and my mind raced with anticipation.

An hour goes by. Still no phone call. UGH.

He shared his story...

"Mom. You have to hear this! God answered our prayer!"

I immediately put the phone on speaker so that Lem could listen as well.

Joseph told us he had been invited to Wesley at the UGA campus. It is a Christian fellowship gathering offered on Wednesday evenings.

He had not been to Wesley in a year. He had been attending another Christian fellowship offered the last few months, but had not even been to that one in a few weeks.

A few friends invited him that night to go with them and he agreed, half heartedly.

He went on to tell us that it was a good sermon and he gleaned much from it.

However, at the end of the message,  a young college girl, one of the leaders of Wesley, went to the stage.

She cleared her throat and spoke these words, "I have to share something on my heart. It may sound crazy and I may not even be hearing the message correctly, but I have to be obedient to The Lord right now.......Is there a Joseph here??"

My son immediately looked around at the crowd of 75-100 kids, and saw no one else answer...so, he raised his hand slowly and said, "I am Joseph."

He then walked up to the stage to where the girl was standing.

My son was in awe, standing there completely shaken to the core.

He then walks back to his seat. His dear friend, Hannah, is crying her eyes out. She knew Joseph's recent struggle and she too had been struggling with her faith.

At the end of the service, Joseph walked up to the girl that gave him the message. He thanked her for being obedient and bold in standing up on that stage not knowing if she was even hearing correctly from God. She did it anyway. She risked humiliation, yet she still obeyed God.

He heard our prayers. And He answered them.

I was praying that God would just help Joseph do well on his biology test in hopes that it would bolster Joseph's faith.

God did IMMEASURABLY MORE than I hoped or asked for.

Never, in a million years, did I imagine Him speaking to Joseph and revealing Himself to Joseph in that way.

A few mornings later, I came across my prayer journal entry the morning before this happened. 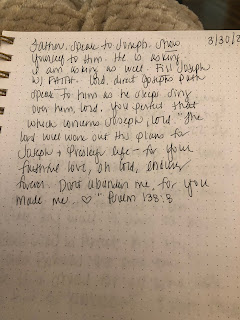 He will do immeasurably more.

I took Joseph to lunch a few days later. The light was back in his green eyes. His face was glowing like a 10 year old. I had not seen that lightness of spirit in him for so long.

God had restored his faith.

I have told this story to everyone that will listen. Joseph has shared it as well.

Friend, do not give up. Ever.

Looking for Shine Girls? We have moved to a new space! You can find us at www.jill-hill.com Also known as Rise and Shine with Jill Hill! C...